Believe it or Not…….

(My mother is looking down in awe! That I, her picky little eater, actually tried OCTOPUS!)

When we met up with the boys last Saturday we went to one of our favorite restaurants. Mostly for the view but they also have good food. And some interesting combination of things I would never think of. Their calamari with balsamic reduction and pickled banana peppers was delicious!

The waitress was extra nice and attentive (the fact that we were the only people in the place might have had something to do with that but I prefer to think it’s because we were such lovely patrons! …..snort)

After seeing how much we enjoyed the calamari appetizer (read:  scarfed it down like we hadn’t had a meal in weeks!) she brought us a complimentary plate of octopus (insert wide eyed emoticon here.)

It looked……just like a baby octopus lying on a plate with elaborate garnish surrounding it…..

And then Son2 cut it into bite sized pieces. I was expecting it to move but mercifully it didn’t. Three forks poised over the plate in the middle of the table and then each one poked a piece.

I waited….you know, just in case……in case they all either gagged and spit it out or dropped dead on the spot. But they didn’t. And then they went back for another piece.

I tentatively took my fork, stabbed a teeny tiny piece, sniffed it, decided I probably wouldn’t gag or die and ACTUALLY ATE IT.

I am here to report……it wasn’t bad. It tasted like pork but had the consistency of chicken. Not chewy or rubbery, it was actually pretty good. I even had a second taste, just to be sure.

But after that I had to stop. I couldn’t get past the poor little thing just lying there on the plate looking……despondent…….suckers turned up in resignation…… 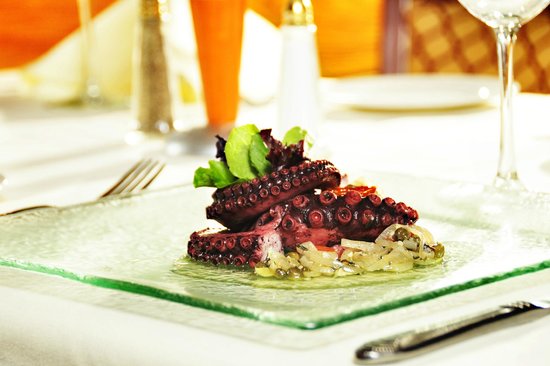