I’m a list maker from way back. I learned from my mother. She was the Queen of Lists and she taught me well. I find that enumerating the things that need to be done and seeing it in black and white clarifies, for me anyway, the trajectory of my day.

Plus I think it’s a very effective mental health tool. To be able to cross something off my list is thoroughly satisfying. To see a WHOLE list crossed off and completed is the ultimate in satisfaction!

And on those days where nothing seems to go right and you get sidetracked, my mother taught me it’s perfectly acceptable to write something on your list that has already been completed just for the gratification of feeling like you completed SOMETHING that day!

But this has been the first time EVER I have made a list to myself and I have NO FREAKING IDEA what it means!

And now it’s got an added layer to it……forgetfulness! The fact that for the first time (that I can remember, lol, pun intended) I don’t know what it means and it is stimulating absolutely NOTHING in my memory banks!

On the other hand…..it’s funny as hell! 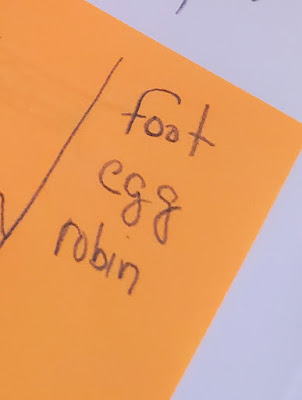 Labels: I have nothing to say and I say it regularly, random musings