Our printer(s) finally gave up the ghost. BOTH! At the same time. Well, not exactly at the same time. Mine was dying a slow, painful death but I kept it limping along for a while. Then Husband's died a sudden death.

So we did a little research and decided to go cheap this time. I only need a printer for scanning my art and Husband just prints receipts. So CHEAP it is!

We bought a Brother. Mostly because the ink cartridges are CHEAP! I mean cheapy cheap cheap!

Not a bad little machine. The biggest complaints online were that it was noisy. I don't know what brand of printer that commenter had before this one but it must have been silent because I don't find this one loud at all!

We plugged it in, set it up and I sat down prepared for the usual learning curve. Considering it's a cheap printer it doesn't have a lot of bells and whistles so I wasn't expecting much of a learning curve.

Well, let me amend that statement. It wasn't so much of a learning curve as a day of disappointment trying to figure out how to get the scanner to scan my art in the colors I used to create it!

I went online to try and troubleshoot and/or calibrate the scanner. After HOURS of pulling out my hair in frustration I have come to the conclusion it can't be calibrated and I just need to learn more about Photoshop to adjust the things I scan......I'm admitting defeat (for now) and will be satisfied with this compilation after a discouraging day of fighting with technology! 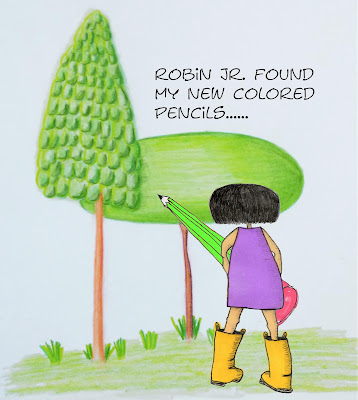 PS I have a few leftover (never been opened) ink cartridges from the old printers. If anyone uses
Epson 69 or HP 920 inks let me know. Free to a good home! ;)