The Shackle of Shame

My job and family used to keep me much more active than I am now.
Retirement may be great but it definitely put a dent in my forced exercise, a.k.a. chores/errands/work/kids/your basic mother routine.

I’ve tried the gym routine but I don’t like ‘group grunting’.
And those MIRRORS! Don’t get me started!

So when the FitBit came out I thought….hmmmm….this has possibilities.
Not a group effort, check.
A timer that reminds me to get up and move away from the computer (read: Facebook) check.
A step counter that clocks my activity, check.

I did copious amounts of online shopping. I checked reviews, compared options and prices.
I finally settled on the Vivofit2.
For a most essential reason….it was the only one that was simple and basic, had a ‘thin’-ish band that shows your stats and it came in PINK!

This was the most important feature.
It HAD to be pink if I was going to wear a shackle on my wrist.
And that’s what I’ve come to call it, my SHACKLE OF SHAME.
It basically shames me into getting off my ass and DO something. Even if it’s only walking around the house. 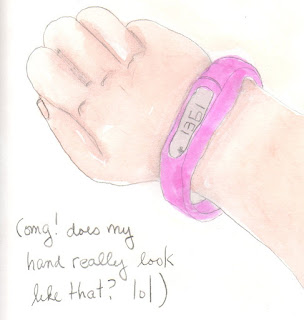