It Wasn’t As Bad As I Anticipated….

So, I finally succumbed and made lentil soup.

Since I’m allowed to have as many lentils as I want….snort….. I looked online for a recipe that didn’t seem too distasteful and proceeded, albeit reluctantly, to conjure up something that would be palatable.

I used my Crockpot and, as usual, I tinkered with it a bit adding some chicken broth as well as the vegetable broth. Other than that I stuck to the ingredient list and just ‘estimated’ the measurements.

You know what? It wasn’t that bad!

It’s not that I object to the taste of the lentils, it's that I have an issue with their texture. I’ve always had a texture issue with food, even as a kid. I liken eating legumes to eating wet sand. They are just so….mealy. But this was quite good and after sitting in the Crockpot all day the lentils were less ‘sandy’ than I remember.

I hope you give it a try! I found it on Chowhound. 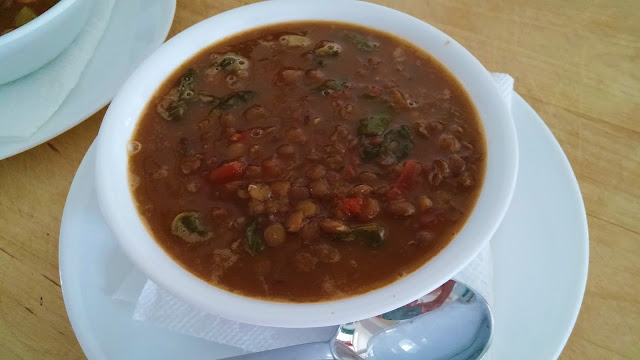 1.    Heat the oil in a large saucepan over medium heat until shimmering, about 3 minutes. Add the celery, carrot, and onion and cook, stirring occasionally, until the vegetables have softened, about 10 minutes. Stir in the garlic and cook until fragrant, about 1 minute. Season with several generous pinches of salt and pepper.
2.    Add the broth, tomatoes with their juices, lentils, bay leaf, and thyme and stir to combine. Cover and bring to a simmer, about 15 minutes. Once simmering, reduce the heat to low and continue simmering, covered, until the lentils and vegetables are soft, about 15 minutes more.
3.       Taste and season with more salt or pepper as needed, then stir in the vinegar. Add the spinach and stir until wilted. If you prefer a creamier texture, purée half of the soup in a blender and add it back to the pot.
Posted by robin cox walsh at 12:00 AM