And a Good Time Was Had by All

It was a little nerve wracking. First time using the new oven....with the automatic probe.....which claimed to cook your turkey to the perfect temperature and then turn off the oven.

So.....bright and early we got up, stuffed the bird, inserted the probe and put him in the oven. The instructions said to set the desired temperature of the probe and then the temp for the oven. 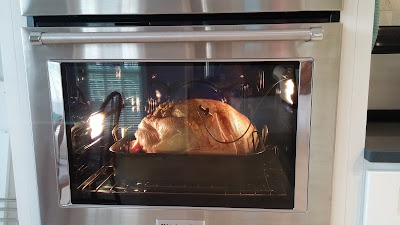 Then we went about our business but kept an eye on the oven. The probe temperature went up quite quickly. Too quickly we thought....and we began to worry. At that rate the turkey would be done by ten AM! Oh no! We told everyone dinner would be served at 1:30-ish.......

But in the end it all worked out and dinner was on the table at the prescribed time. Whew.....

And it was the BEST turkey ever!
(Just for clarification.....we say that every year! LOL)
Posted by robin cox walsh at 12:00 AM