Into Each Life A Little Rain Must Fall

So, things here in remodel land have been going along swimmingly....until they weren't! LOL

Husband was plowing through tasks left and right. We got the oven/microwave into it's cabinet....I helped (it was HEAVY!) It went quite well........

Then it was time for the tile to go up on the wall behind the cooktop. No big deal. Husband is a pro at tiling by now......except maybe not......

We chose marble tile, a natural material. We knew that it being a natural material there would be differences in the coloring/striations. We KNEW that in such situations you are supposed to open ALL the boxes and mix them up so you don't see one 'block' of tiles looking too much alike and then blam another 'block' that look different. Except in our excitement to get it up on the wall and see it we.....forgot that step.......

Sooooooo halfway up the wall we stood back to admire our handiwork, and open the next box of tiles aaaaaand.......EEEEEEEEKKKKKK.......they were all mostly WHITE! Up to that point what was already on the wall was.....all grey!

Well, we could pry off some of them here and there and fill in with the 'white' ones.....maybe???

Long story short...... Husband pried off ALL of the tiles he had already installed (except the ones he cut to fit around the outlets) scraped the thinset from the wall and off the backs of EVERY SINGLE TILE.......he was NOT a happy camper. 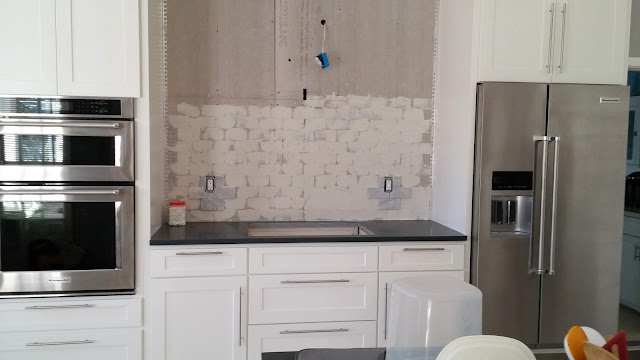 The next morning we laid out two shipping blankets, opened ALL the boxes of tiles and laid them out in a cohesive design that we liked.
I think it's going very well.......second time's the charm! 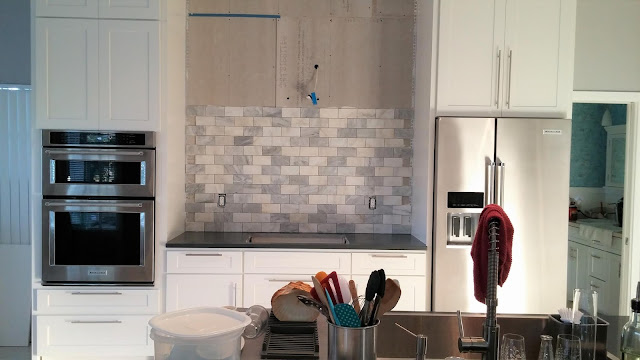 Lesson learned: Open ALL the boxes BEFORE you start your tile installation!
Posted by robin cox walsh at 12:00 AM