There is a time in your life when all your friends pair up and there seems to be a glut of weddings to go to. You know how it is. It was during this time my then fiancé and I spent a great deal of time at the ‘huge wedding venue’ in our town. It was a gargantuan place catering to all the needs of a bride from the tacky chapel (where they actually had a cloud effect for the bride to enter, complete with dry ice vapor and colored lights!) to crystal chandeliers at every turn.

They had enough rooms to cater multiple receptions at one time. It was a great way to comparison shop, so to speak. We used the cocktail hours to slip from our invited party to crash some of the other receptions, just to see what they had to offer. (I would have liked to have sampled their entrees too but that would have required more duplicitous shenanigans than just mingling with the crowd during the cocktail hour!)

It was during one of these reconnaissance missions that I was introduced to a canapé that was so perfect in its simplicity I immediately knew I needed to reproduce it at home. It was just a slice of salami rolled around a sweet baby gherkin, cushioned by a dab of cream cheese but the juxtaposition of the sweet and salty was perfection!

I tell this story as the prelude to this:
I made them when the boys were little. It was the perfect finger food for little hands. But one day I didn’t have the required ingredients so I improvised and I invented ‘Bologna Roll-ups’! (I’m pretty sure I didn’t really invent them but I’m taking credit anyway!)
It’s just a slice of bologna rolled around a sliver of cream cheese. It was a hit! They liked them better than the salami version so it became a staple in our lunch repertoire.

And to this day, when I’m feeling nostalgic, (or when I’m just jonesing for some bologna) I still treat myself to a few…. 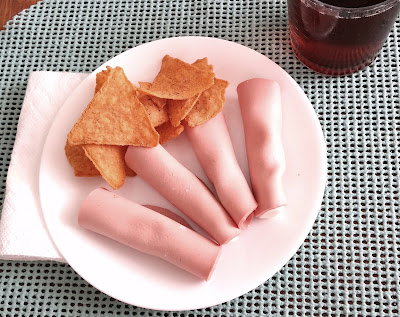 They may not look pretty but they sure taste good!  Right guys?
Posted by robin cox walsh at 12:00 AM