When Son1 was little there was a time he was having ‘issues’. He was sleep walking, had night terrors…..something was bothering him but he wouldn’t talk about it. We tried to get him to tell us what was wrong but he clammed up like a….well, clam!
Until one night when I was tucking him into bed.
We did our usual nighttime ritual, read the stories, said goodnight to all his ‘friends’ i.e. his stuffed animals, including Wolfie.
Wolfie was a puppet. A cherished member of the window seat gang.
I don’t know what came over me but as we said goodnight to everyone I grabbed Wolfie and started talking to Son1 in what I thought was a comforting Wolfie like voice.
And to my surprise he responded as if Wolfie was alive and a separate entity. Not just Mommy with a puppet on her hand!
So I went with it. I, or rather Wolfie, asked him what was bothering him. And Son1 spilled the beans!


I don’t remember now what the problem was or how we resolved it but I do remember that for a long time after Wolfie was part of our night time ritual.  Every night Son1 would tell Wolfie how his day had been and if there was anything going on he would ask Wolfie for advice. 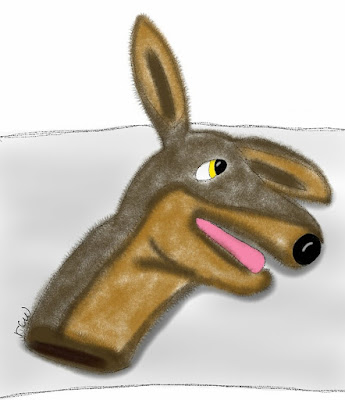 I guess it worked out okay. Son1 isn’t too badly screwed up.
But at the time I remember how terrified I was!!!I had no idea what I was doing!!! There’s a HUGE difference between a background in Early Childhood Education and a degree in Psychotherapy!!!