I Made the Right Decision

[Okay, let me preface this post by saying I am a traditional girl who likes square rooms. I know and understand  90° angles in a house.]

This house is contemporary.  I guess that means the design calls for asymmetry. To that end the architect designed it with all sorts of odd walls that come together at unusual angles.

For example, in the laundry room the wall suddenly turns a corner and forms a small triangular space they made into a counter top. It’s next to the sink so I guess it does serve a function but they put a regular square cabinet under the sink wasting all that space under the counter.
I suppose they did this because it backs up against the master bath. And the master bath is a plethora of odd walls at all sorts of strange angles.
We took down the plant shelf (that was so 1980’s) and that has helped quite a bit.

Which finally brings me to the point of this post……...

In taking down the plant shelf Husband had to open up part of the wall. When I happened to look inside the first thought that popped into my head was, “OMG!!!  Look at that rat’s nest of two by fours! I was certainly right when I decided against becoming an architect. All that math would have killed me!!” 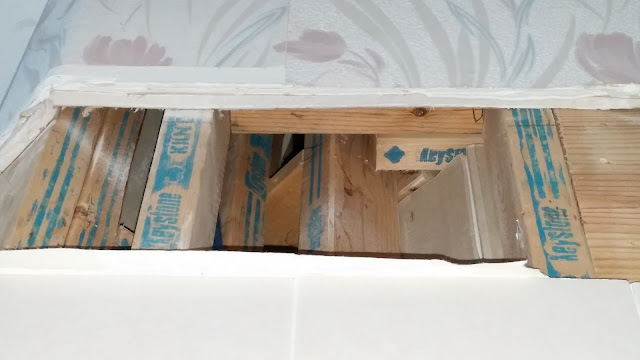