My Parents; the Early Years

When they were first married they had an apartment in a converted row house in Greenwich Village, owned by an elderly widow.
It had a parlor on the first floor for visitors because Mrs. Casey, the landlady, was very old fashioned and did not allow visitors past the first floor.

They only had two rooms, a living room and a bedroom (bathroom down the hall) cooking wasn’t allowed.

My mother snuck in a hotplate. She had to keep moving it to different hiding places because Mrs. Casey would sneak into the apartment when they were at work to try and find it!

My father was an early riser, my mother….not so much. So on Sunday mornings my father would quietly leave my mother to sleep late and go for the Sunday papers.
Mrs. Casey thought he was a good Catholic boy going to Mass every Sunday. (He did not dissuade her of this notion.)

Okay, so now I’ve set the scene----Mrs. Casey, nice Catholic lady, slightly nosy with access to their apartment during the day.

Add to this mix a couple my parents knew from college.
They weren’t married.
My parents would, upon occasion, allow them to ‘borrow’ their apartment for afternoon trysts.

One afternoon Mrs. Casey walked in on them.

She was very put out but my father had the gift of blarney (with a capital B) and soon smoothed it over by spinning a tale so intriguing Mrs. Casey couldn’t help but believe it.

He told her the couple was secretly married but the young woman was a student nurse, living in the hospital dormitory. Nursing students weren’t allowed to be married. Plus his parents didn’t approve of her because she was Irish. They were hoping she would become pregnant. Then they could tell everyone the truth, she could quit her studies and settle down to being a housewife and mother.

After that, Mrs. Casey couldn’t get them into bed fast enough when they came to ‘visit’! 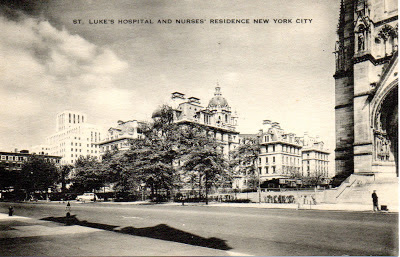