One of the ‘chores’ we had when visiting Grandma was taking out the garbage.
She kept the can in the basement.

You never saw a basement like this.
It was pristine!
You could have literally eaten off the floor.
And it was completely, totally, utterly empty except for the garbage can.

The basement floor was painted to within an inch of its life with glossy grey sealant. The walls were glossy white.
And sitting right in the center was the garbage can.
So shiny and new looking you would think it was never used.

She would spread out newspaper on the floor, and the can would be lined with newspaper.
As you filled it with garbage you had to fold down the pages of the newspaper to cover the garbage so it wouldn’t stink.

Have I mentioned she was OCD? 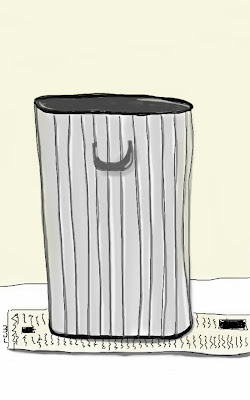