When I was in third grade two if my classmates were identical twins named Pat and Mike.
The only difference between them were two small moles on Mike’s left cheek.
Apparently the moles were tiny or at least not very noticeable because the adults always had trouble telling the two boys apart.
I never did.

I liked Pat.
He did not return my affections.

Mike liked me.
So much so that one day he showed up on our doorstep stating that he wanted to marry me.
(Humongous diamond ring in hand!)

I stood at the top of the stairs madly waving my arms and shaking my head to let my mother know I was not at all interested in this idea.
So she sent him on his way saying she would relay his offer to me.

I was both disappointed and impressed at the same time.

Disappointed it wasn’t Pat, but impressed that Mike had ridden his bicycle all the way from his house to ours.
It was quite a distance plus it involved crossing Scarsdale road!
And without the crossing guard that was a pretty scary endeavor!

I guess love does conquer all fears! LOL 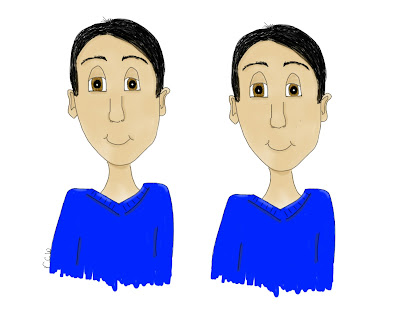