I Have Issues with Inanimate Objects

They don’t like me.
To be fair, the feeling is mutual.

Like toilet tissue.
Why do the manufacturers feel it necessary to super glue the end of the roll to the next layer, making it nearly impossible to start unraveling the damn thing without shredding it into long unusable strips?

I picture a demented little man operating the gluing machine in a factory somewhere laughing maniacally as he thinks about all the frustrated people trying to open a new roll and getting his jollies! 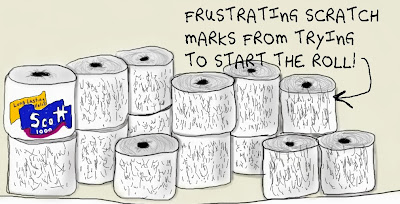 And then there's the computer.
I find myself yelling at the computer when it doesn’t cooperate.
I say things like, “Oh c’mon! You KNEW what I meant!”
It does, you know.
Just try Googling something and watch as it finishes your sentence for you! So don’t tell me it didn’t know what I meant when I misspell a word!
I know it’s just screwing with me.

I once had a sewing machine that gave me so much agita that one day in frustration I started beating on it with my good Gingher pinking shears! I chipped the sewing machine (who, by the way, never forgave me and acted even worse after that!) and I broke the scissors!

And don’t get me started on child proof bottle caps!

I’m convinced that inanimate objects are far from inanimate.
They are sadistic little creatures whose mission in life is to frustrate, confuse and annoy us until the inevitable day when they will take over the world!