“How Many Holes in the Wall Does it Take to Hang a Picture?”

You’d think hanging a picture is pretty straightforward, right?
You’d be wrong.
At least for us (ahem….you know what I mean, lol.)

Here's how it goes.....
First, check to see if the framer has placed the hangers evenly on both sides of the back of the frame. (Believe me when I say to measure this! It will save much discussion later.)
Second, measure the distance between the windows and divide to find center of wall on which the picture will be hung.
Third, measure the picture frame to determine the center.
Fourth, have Husband hold picture up to wall to decide how high it should be.
Fifth, put pieces of painters tape on wall to mark all measurements.
Sixth, get confused as to which side of the painters tape marks your spot.
Seventh, when you’re ABSOLUTELY SURE you’ve measured correctly and you’re satisfied as to the placement of the picture……drill two holes and insert oversized screws (just to be sure they will bear the weight of the picture) into wall.
Eighth, hoist picture up to wall and try to catch the wire on both screws.
Ninth, swear a lot while doing number eight.
Tenth, center picture so it hangs evenly on the screws…..except….it doesn’t.

Eleventh, move picture around on screws and try to determine why it won’t hang straight.
Twelfth, take picture down and take all measurements again.
Thirteenth, conclude the solution is to move one of the screws up ½ inch to compensate for the tilt of the picture.
Fourteenth, unscrew/re-screw screw.
Fifteenth, re-hang picture and straighten.
Sixteenth, stand back and see it’s still slightly ‘off’.
Seventeenth, decide its ‘good enough’ and three giant holes in the wall is sufficient damage for one day.

So, the answer to the question at the beginning of this diatribe is THREE. It takes three holes for us to hang a picture. And for some reason, ahem, we didn't fix the extra hole.
It also took three holes to hang the bling mirror. We never bothered to fix the third hole there either…..so both holes are still there.....behind their respective hangings……gapingly open……..you can’t see them but they haunt me…..for so many reasons….not only my OCD-ness but I lie in bed at night wondering what sort of ‘critters’ are going to come crawling in through those holes!
Mostly I worry about the one over my side of the bed! 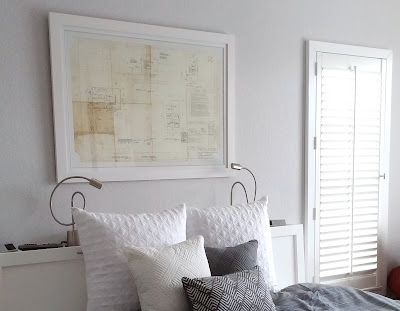 It's an aged and slightly damaged  blueprint of our old house up north. A little reminder of our 'previous' life.