What Triggers A Memory……?

When I was about ten I was obsessed with playing jacks.
I played ALL the time.
The kitchen linoleum was the best place for playing.
I would bounce that ball for hours on end.

Then my parents carpeted the kitchen!
I was furious!
Who ever heard of carpeting a kitchen?

My father, who was president of a carpet corporation, that’s who.

I was really pi**sed!
And I didn’t let them forget it either.
I protested and grumbled and griped and complained for weeks!

My mother suggested playing in the family room, “But the ball doesn’t bounce right on the parquet!” I lamented.
Play on the porch she said, “But the concrete scrapes my hand” I cried.

I was a total pain in the ass. (I thought if I was annoying enough they would change their minds and leave the linoleum. I had a lot to learn about psychology back then!)

I remember I kept my jacks in an old band aid tin.
I loved the way they rattled when I shook it.

I guess my infatuation waned after the carpet was installed.
I played at friends houses but it wasn’t the same and my interest turned to other things.

There is no point to this story.


I was just wondering what triggers a memory……. 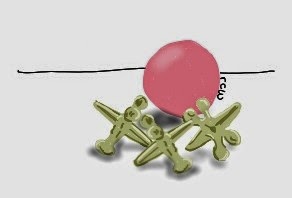