My parents believed females should be self sufficient.  Not dependent on a man to rescue them.
To that end they taught me all sorts of things, one of which was how to change a tire.

One day I was crossing the campus when I saw a young woman wearing a mini skirt and high heels (this was in the hippie-dippy days of bell bottoms and peasant blouses) leaning against a car with a flat tire.
I watched as she ‘posed’ in a helpless manner.
The guys looked as they passed, but none stopped or offered to help.

I got the jack and went about changing her tire as she continued to shoot ‘come hither’ looks at the passing male population.
We chatted amiably as I worked, and as I was putting the tools back into her trunk she turned to me and asked, “Are you a lesbian?”

Apparently where she came from only men and lesbians were allowed to change a flat! LOL 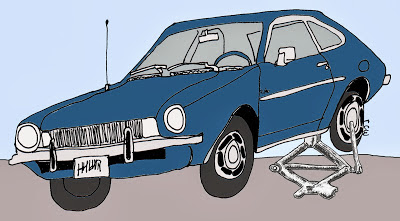